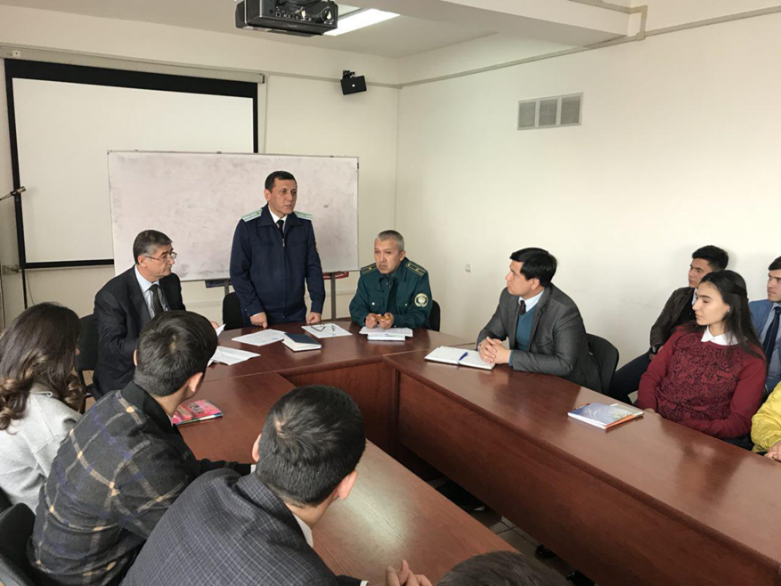 At the faculty of Chinese study deputy rector Sh.Aripov hold preventive event together with public procurator’s office of Mirobod district and district administration of internal affairs with aim to increase the legal knowledge of the young students, prevention of the breaking law among them. In his speech Sh.Aripov stated about prevention breaking law among the young students and realized substantial work for preventing such a kind of conditions at the Universities of the Republic of Uzbekistan.
After that, assistant of prosecutor of Mirobod district Baxtiyor Akramov made speech about the state policy which is directed to the youth, its essence, conditions which were created to them by our government and attracted attention of the young students to the obligations of the youth in front of own nation. He told about that for the last years committed grave crimes, because of spoiling environment and fighting against it should has mass character and informed the young students about fighting against breaking law at the Universities, religion dogmas, missionary works and drug dealing and stated that for elimination this evil was founded “prosecutor control” and “prosecutor hour”. B.Akramov explained to the auditorium suffers a just punishment, types of the crime and commented the essence of some paragraph of criminal code. He appealed the youth which are the future of our country do not break law and to appreciate created conditions and to use own power and talent for the development of our Motherland and to the realization of the great purpose.
Finally, major of internal affairs of Mirobod district Samariddin Zayniddinov made speech about breaking law and its types among the young students at the Universities because of irresponsibility. He informed about the consequences of the crime which was committed in this district at Medical College. At the end of event the young students and professors-teachers got answers from specialties to the concerning questions.