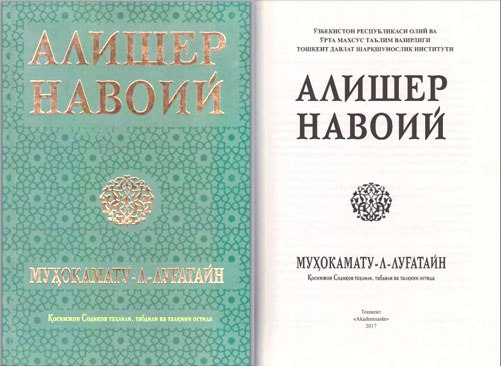 Thinker of genius Alisher Navoi five centuries ago in his monograph “Muhokamat-ul-lug’atayn” (The comparison of the two languages) laid down foundation in world philology, absolutely  new scientific direction which basis on comparative analysis of languages – comparative linguistics. The scientist by means of work elaborated in comparative linguistic methods of researches, analysis, and methodological basis. Up to this date this scientific primary source in modern philology takes first place in analysis and methods of researches.

Scientific researches which basis on new scientific direction founder of which is Alisher Navoi in Europe were made only in the first half of the XIX century and it took place in history of philology under the name historical-comparative linguistic. Nowadays this direction of science takes solid place in modern linguistic.

The work of Alisher Navoi “Muhokamatu-l-lug’atayn” opened the way to creation of scientific research method, scientific exposition and also created its scientific terminology. From this view point this work is valuable fundamental research work for Uzbek and world science.

Recently was published new edition of this work with analysis, changes and interpretation of one of the expert of the history of Turkic languages – Qosimjon Sodiqov (Alisher Navoi. Muhokamatu-l-lug’atayn. Toshkent: “Akademnashr”, 2017). This book supplemented with research work which is devoted to this work, scientific transcription of “Muhokamatu-l-lug’atayn”, simplified translation of modern Uzbek language, word list of scientific terms which were used in the work. As appendix were given facsimile of Paris and Topkapi copy.

There are four copies of Muhokamatu-l-lug’atayn preserved up to this date. One of the copies keeps in Istanbul in Revan library of museum and castle Topkapi which is part of collection of Alisher Navoi. Supposedly it is the oldest at present copies.

Another copy of the manuscript keeps in Istanbul in the library Suleymaniye in Fatih department and included to the collection of Alisher Navoi. Paris copy which was written in 1526-1527 keeps in national library of Paris and forth copy of the work keeps in Budapest.

New edition of the work of Alisher Navoi “Muhokamatu-l-lug’atayn” was published on basis of comparative analysis at present copies.

Among copies of “Muhokamatu-l-lug’atayn” Topkapi and Paris copies very similar concerning of contents of the text. Those problems that available in Topkapi copy same situation at Paris copy too.

The copy of the work which keeps in the library Fatih has some differences in comparison with other copies. It is important, that words and sentences which are absent in Topkapi and Paris copies presents in this copy. Concerning of the text this copy has some advantages.

In his work Alisher Navoi opened supporting methods of comparative analysis. For example, he showed possibility of reaching of substantiated scientific results through comparison of singular and stratums in lexicology. To this purpose Alisher Navoi relies to the rich vocabulary of Uzbek language gave hundred verbs which have not antonyms in Persian. There are ninety nine verbs in Tashkent edition of this work, in Topkapi and Paris copies ninety nine and Fatih and Budapest copies hundred. These two copies have hundredth verb which absents in other copies. It is the verb “chimdilamoq” goes in consecutive order after the verb “qichig’lamaq”. The secretary which rewrote this copy accidently missed this word. Absence of this verb in Tashkent edition hides in this reason, Q.Sodiqov thinks that tha basis for publication was Paris copy.

At present copy has not only this case, but the difference of structure of sentences. For example, some sentences in Topkapi and Paris copies was edited in Fatih copy or sentences which absent in two copies present in Fatih copy. Supposedly, that the presence of some omissions it is because of rewriting, but in some places was written important information the author of which is Alisher Navoi from the view point of language and style except the author nobody has opportunity to make addition.

Works of Alisher Navoi were created according to vowel harmony “iron law”. It gives opportunity to understand the system of sounds. For example, the samples which were given by the author “yo’g’on” the root of the word indicator of infinitive adds maq „”qurug’samaq”, ‘‘aldamaq”, ‘‘qisdamaq” , ‘‘yalinmaq” but to such a words like; ”ingichka” adds the version -mak „”igirmak”, ”indamak”, ”surkanmak”, ”ortanmak”. Therefore in the language of Alisher Navoi the last line “yo’g’on” together with a, “ingichka” a both of them use in form of independent phoneme.

There is an interesting example in “Muhokamatu-l-lug’atayn” which related with movement of animals. In work which was published in Ankara this sample was given in this way: “Uy mugramagiga va ishak ingramag’ig’a va ulimag’ig’a lafz yo’qtur. It should be noted that this sentence absents in Topkapi copy, but in Fatih copy is present, for publication was used this copy. In case of paying attention to the case additions we will run down with such a condition: the word “tegishmak” in spite of “ingichka” is the root to it adds “yo’g’on” adds “tegishmag’ig’a”.

It should be noted that in new edition such a kind of textual differences were analyzed. According to the view point of scientist when Alisher Navoi was alive existed two variants of the work “Muhokamatu-l-lug’atayn”. That is the variant which was rewritten by the secretary Alisher Navoi by the method of correction and addition edit again. Therefore at that period to whom which thirsts for knowledge this work was spread in two variants.

The new edition of “Muhokamatu-l-lug’atayn” relies on latest scientific views in sphere of Turkic study. It includes the changes to the form of reading and pronunciation of the word. One more privilege of this edition contains that the text of the work in Latin alphabet relies on international scientific transcription. It should be noted, from scientific view point that the work of Alisher Navoi for the first time published in this transcription.

In brief the work “Muhokamatu-l-lug’atayn” which was published by “Akademnashr” was great event in Uzbekistan in sphere of studying of works of Alisher Navoi. It should be noted that publishing works of our great ancestors relies on modern methods of scientists. I hope that this work will serve important source for creation of works in sphere of source and textual study.